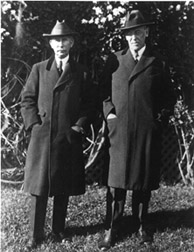 In early 1916 America moved closer to war. Texas had a man in the White House. No, not President Woodrow Wilson, but his personal advisor, Colonel Edward M. House.

He was “President Wilson’s closest advisor during the war,” according to Ralph A. Wooster in Texas and Texans in the Great War. House arrived in England on January 5, 1916 on one of three trips to Europe prior to America’s entry into the war. As Wilson’s representative he consulted with European leaders – on both sides.  Departing in late February, 1916 House ultimately concluded that war between the U.S. and Germany was unavoidable. He advised Wilson to request a declaration of war from Congress after the German submarine campaign led to a break in relations, but it would be another year before Wilson acted on this advice.

Before serving Wilson, House was a successful businessman who became a confidant and advisor to Texas politicians. Named an honorary Lieutenant Colonel by Texas Governor James Stephen Hogg in 1892, the press began to refer to him as Colonel House. House was valued as a skillful organizer and motivator and managed the campaigns of three Texas Governors, as well as a Senate campaign.

House met Wilson in 1911 while summering near New Jersey where Wilson was then Governor. He worked with Texas Democrats to secure Wilson’s nomination in 1912. House was soon in Wilson’s inner circle and within a few months of Wilson assuming office House was referred to as the “Assistant President” by Harper’s Weekly.

After the United States declared in April 1917, Wilson named House to head the American War Mission to Europe. Ultimately House also had a leading role in peace negotiations following the Armistice.

In addition to House, three other Texans served in President Wilson’s administration. Former Congressman Albert Sidney Burleson of Austin was Postmaster General and the liaison between Wilson administration and Congress. Attorney Thomas Watt Gregory headed the Justice Department. David F. Houston (former President of both the University of Texas and Texas A&M University) was Secretary of Agriculture and member of the Council of National Defense.