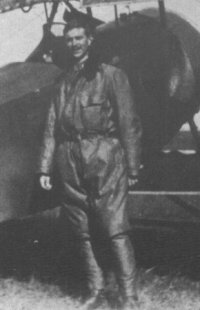 H. Clyde Balsley was among the American volunteers who joined the Lafayette Escadrille. Authorized by the French, the Escadrille Américaine (Escadrille N.124) was deployed as an operational flying squadron on April 20, 1916 in Luxeuil-les-Bains, France. On June 18, 1916 Balsley would have the distinction of being the first American flyer to be shot down in World War I.

After leaving his job working in his Mother’s bakery in San Antonio, Balsley travelled to France and originally served as a volunteer ambulance driver. He captured his initial enthusiasm about serving in his diary:

“Many strange thoughts have been coming in my head all day. … How strange it was for me to be there. I, who a little more than a year ago never even dreamed of France. I was in a lecture room full of officers and soldiers participating in this war and I was one of them. That is the wonderful part of it, that I should be there as one of France’s soldiers.” (San Diego Air & Space Museum Blog http://sandiegoairandspace.tumblr.com/, accessed 4/14/16)

Balsley’s initial training was typical of young pilots in the war. He received flight orientation and had flown practice missions behind the front. On June 18, 1916 Balsley was part of a formation flying at 15,000 feet when they encountered an estimated 40 German aircraft. Blaine Pardoe, is his book Lost Eagles, provides a description of the engagement that brought down Balsley:

“Balsley had one and only once combat mission, in a Nieuport on June 18, 1916. Balsley had spotted a German Aviatik and dove on the airplane, coming within fifty meters of his intended victim. When he went to fire, his Lewis gun jammed. He broke off the attack to clear the jam and was pounced on by three enemy aircraft.

“At Twelve thousand feet he was rolling over, flying upside down, when he was struck by an explosive bullet. Dazed and in horrible pain, he angled for a landing spot in the rugged land between the trench lines and cut his motor. Amid exploding artillery shells he hit the early and the Nieuport flipped over. He dragged himself from the wreck, unable to walk, and was saved by four French infantrymen.” (Blaine Pardoe, Lost Eagles: One Man’s Mission to Find Missing Airmen in Two World Wars, The University of Michigan Press, 2010, p. 138)

Basley was taken to French field hospital at Vadelaincourt were her recovered for six weeks before being sent to an American hospital. He underwent surgery eight times. He returned to the United States in the fall of 1917 where he finished the war as a Captain in the United States Air Service. H. Clyde Balsley was awarded the Medaille Militaire and the Croix de Guerre by the French for his actions on June 18 and for his role in the Lafayette Escadrille. He died in 1942.

Photo: Nieuport 11 (nickname bébé) flown by Clyde Balsley. With his personal marking of a white star, it was camouflaged with standard brown and green upper surface and natural under surface. It was equipped with a 80 hp 9 cylinder LeRhone rotary and was capable of 97 mph. Armament was one fixed forward firing Lewis machine gun mounted in the top wing to fire over the propeller. (Artwork by Alan Durkota https://www.neam.org/lafayette-escadrille/aircraft.html accessed 4/14/16)