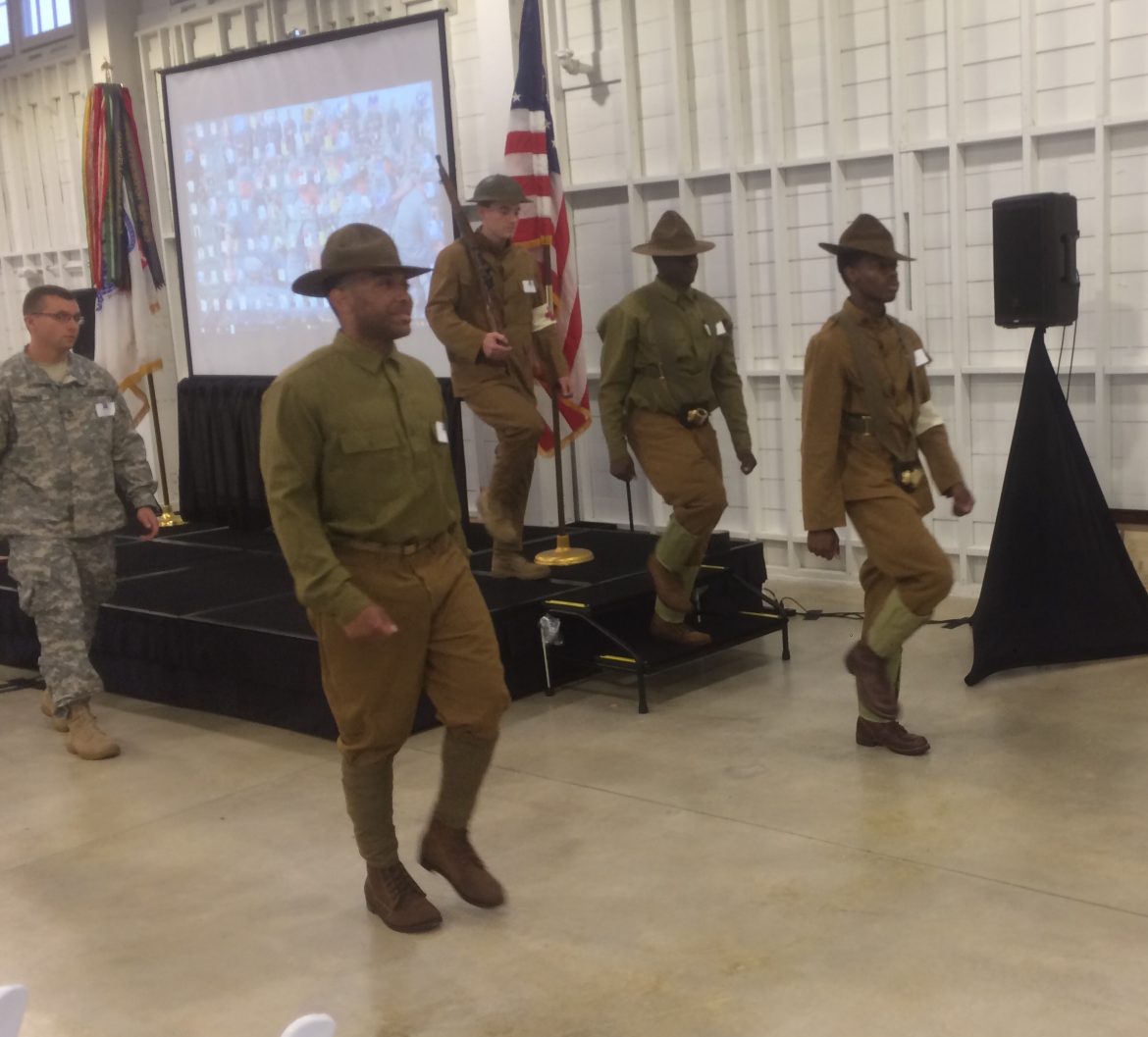 In 1917, San Antonio was the largest city in Texas and was already a key military logistics and training center. The U.S. Army’s Fort Sam Houston was considered a plumb assignment. The fort had already served as base of operations for much of General Pershing’s Mexican Punitive Expedition (including the stationing of Signal Corps’ first squadron of “Jenny” biplanes), which concluded early in 1917. Once America entered the war, San Antonio expanded exponentially. The warm climate made Texas – and San Antonio in particular – an attractive location for the military expansion of WWI. The City added multiple training centers, including Camp Travis, Camp Bullis, and Camp Stanley, as well as numerous early aviation training fields and a balloon observer training camp (Brooks Field, Kelly Field, Camp John Wise)

On May 20, San Antonio revisited part of this historic past with a WWI Centennial commemoration inaugural event held at historic Hangar 9 on Brooks City Base (formerly Brooks Field). The luncheon event featured presentations, guest speakers, exhibits, reenactors, and memorial wreath-laying ceremony at the grave of Sidney Brooks that is immediately adjacent to Hangar 9. Hangar 9 is a National Historic Landmark and the only remaining wooden WWI aircraft hangar still in its original location. A $2.5 million dollar restoration was completed in March.

Over 200 people attended the Saturday ceremonies that were scheduled to coincide with Armed Forces Day. San Antonio’s Mayor, Ivy Taylor, presented a proclamation recognizing the role of the City in the Great War. State Senator Donna Campbell presented a copy of the WWI Centennial Resolution passed by the Texas Senate on April 5. A special message from the Texas Governor was also read during the luncheon. Speakers included WWI Centennial Commission Commissioner MajGen Alfred “Freddie” Valenzuela, USA (Ret) and several local historians and dignitaries. A live radio broadcast from the hangar proceeded the event as part of the effort to promote interest in the WWI Centennial commemoration. The event was organized by the Daughters of the Republic of Texas (Alamo Couriers Chapter) in partnership with the Texas World War I Centennial Commemoration.

As an Armed Forces Day event included the recognition of several WWII veterans in attendance, as well as veterans from Korea, Vietnam, and subsequent conflicts. One WWI veteran on hand was LtCol Dick Cole (age 103), a Texan and the last surviving member of the Doolittle Raid (the 1942 carrier-based B-25 bomber attack on Tokyo).

The ceremony’s Master of Ceremonies was the City of San Antonio Director of Military Affairs, MajGen Juan Ayala, USMC (Ret). At Saturday’s event the City announced that San Antonio’s informal moniker (dating to at least WWI) as Military City USA has been formally recognized with a trademark. The City of San Antonio is also preparing for its 300th anniversary.

Exhibitors included the Texas Historical Commission, period uniforms and equipment, authors, a WWI ambulance, student filmmakers from St. Mary’s University (WWI micro documentaries), and WWI posters from the extensive collection of the San Antonio Public Library Texana Collection. The Texas Historical Commission highlighted their WWI Mobile App, a state-of-the art way to identify historic locations around the state using a smart device. The final event of the day was a wreath-laying ceremony conducted by BGen Heather Pringle, USAF, the commander of the 502nd Air Wing in San Antonio and MajGen Ayala. The wreath was laid at the grave marker for Sidney Brooks. Brooks was killed in a training accident near the base during WWI. He was also the first WWI-era San Antonio native to die in a military aviation incident.