THE LEGACY OF WWI TEXANS — THE ROLL OF HONOR PROJECT

With the conclusion of the official WWI Centennial period, the National World War I Roll of Honor provides a way to carry the remembrance of WWI Texans forward for future generations.

Established in collaboration with U.S. WWI Centennial Commission and located on the web at https://www.rollofhonor.org/ww1/, the Roll of Honor Foundation established an online registry of U.S. servicepersons. The site allows former military members and their families to display their military experience, records of achievement and photos in a digital visual biography.

The Roll of Honor also serves as a resource for researchers and individuals studying the genealogy of their WWI ancestors. There are currently 4 million WWI service member profiles accessible on Roll of Honor, created from national, state, and local WWI service records. Based on the various records available, these individual profiles include service dates, unit insignia, assignments, and awards received. Researchers can also register on the site and create profiles for individual soldiers, sailors, and marines not yet profiled, or add information to existing profiles. 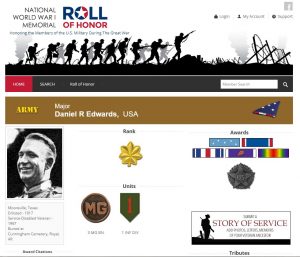 Daniel R. Edwards Roll of Honor profile. Edwards was one of four Texans to receive the Medal of Honor for actions during WWI.

“This is an opportunity to carry forward the remembrance of Texans who served in the Great War beyond the Centennial period,” according to Jim Hodgson, Co-Director of the Texas WWI Centennial Commemoration. “If you have a WWI ancestor, adding their name and information to the National WWI Roll of Honor is a way to preserve their legacy.”

The National WWI Roll of Honor is a non-profit organization working in partnership with the United States World War One Centennial Commission. Free to the public, the site also provides an opportunity to contribute to the National World War I Memorial in Washington, D.C. (https://www.worldwar1centennial.org/). Design, site selection, and local approvals have been completed for the Memorial.