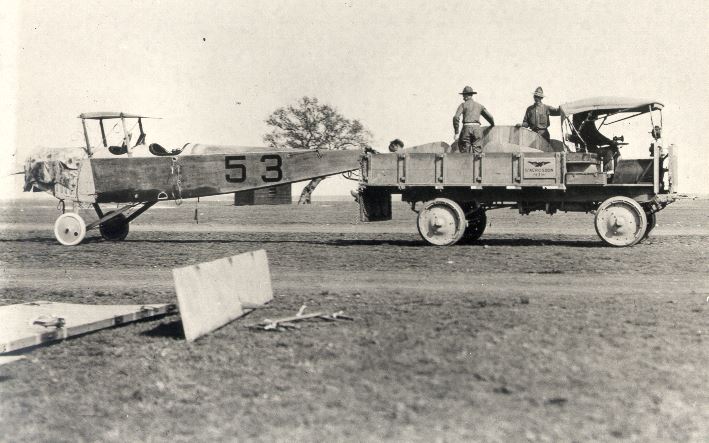 The first Aviation Section of the US Army Signal Corps – the story continues…. After Leaving Fort Worth, the field that Foulois established was north of Fort Sam Houston, San Antonio, south and east of the intersection of modern Harry Wurzbach Highway and Rittiman Road. Originally, it was called “Aviation Post”, in keeping with Fort Sam’s habit of naming sections of the fort after the branch occupying it.  (The post still has areas called Staff Post, Infantry Post and Artillery Post).
As the war waged on in Europe, Foulois got his wish and the Army did acquire more aircraft, outgrowing the Aviation Post.  The Army acquired a larger portion of land about nine and one-half miles southwest of Fort Sam for their use.  In April 1917, air operations were moved from the Aviation Post to the new installation, named Kelly Field, named after George E.M. Kelly, who died in a crash at Fort Sam Houston in 1910. Aviation Post continued to be used as an adjunct field for a while and was named Dodd Field, in honor of early aviator, Towsend F. Dodd, who died in a plane crash in 1919.  Now covered with Army Reserve buildings and a housing area, the area is still called Dodd Field. Attached are images of #53, mentioned in the article as the Army’s newest aircraft.  One shows a bit of wear and tear and the other of #53 serving on the Border.