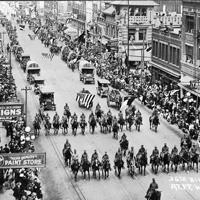 On the 4th of July 1916, World War I had been raging in Europe for two years, and Tarrant County was about to play a significant role in that war. For starters, On July 5, 1916, the Fort Worth Record reported that the U.S. Army ordered 13,950 horses and mules through the Fort Worth Stockyards. This is long before the U.S. officially declares war in April of 1917. Foreign powers had been purchasing through the Stockyards for at least a year prior.  Not long after, Tarrant County hosted more air fields than any other county in Texas and served as home base for the 36th Infantry Division at Camp Bowie.  Tarrant County Archives welcomes the public to view a special exhibit, which will be on display through the centennial of Armistice Day; November 11, 2018.