FINDING TEXAS WWI SERVICE RECORDS — WHO SERVED IN YOUR COMMUNITY? 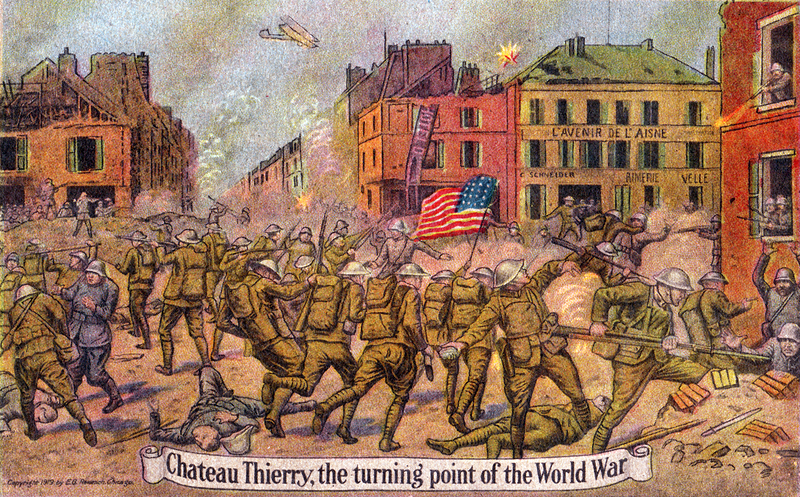 Sergeant Simon David Barber didn’t make it home. Born in Rockport on January 17, 1893, he enlisted in the Marine Corps just days after the United Stated declared war. Serving with the 6th Marine Regiment in France, he was wounded at Chateau-Thierry on June 22, 1918. Barber “died of wounds” five days later. Awarded the Croix de Guerre (with bronze star) for “personal bravery and coolness under the most violent bombardments”, his mother was notified of his death at her home in Rockport. 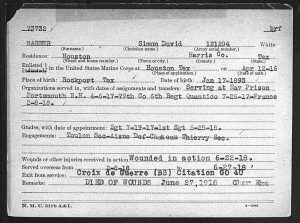 Barber’s actions are preserved as part records established in Texas almost 100 years ago. The Texas Military Forces Museum located at Camp Mabry in Austin has long been the location of all Texas WWI service record cards. Over 250,000 records were initially created on 5″x7″ cards shortly after the war to document each military service member who entered the service from Texas. While information varies somewhat, the cards list the name, home town, date of birth, date of enlistment, branch of service, unit assigned to, battles or engagements, and military wounds received, and valor decorations awarded to each individual.

The Texas service record cards for WWI have been digitized and are available on FamilySearch.org. The service is free to users, but does require you to register and create a logon and password. Once logged on to the site, users can find the digital image of these cards on the records database titled Texas, World War I Records, 1917-1920.

Need to locate WWI veterans from your city or town? To isolate for your city, on the opening page where you normally put in a name, under “Search with a Life Event” choose “Any” it will then bring up a box which says “Any place” type in the town or county name and hit search.

Service record card for 2nd Lt Frank Moore, of Houston who was killed in action while serving with the 88th Aero Squadron: 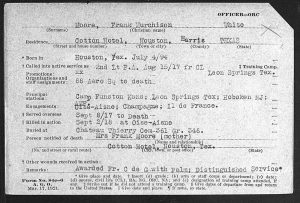 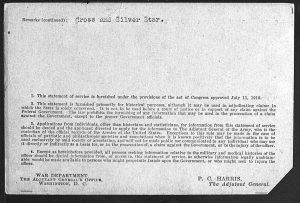