ALL THE TEXAS WWI BASES, GREAT AND SMALL 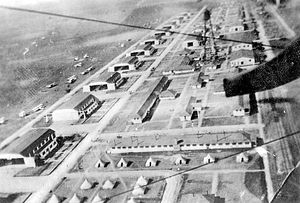 Texas saw unprecedented growth in military training sites during the Great War. The climate and ready availability of open land made Texas an attractive location. In the case of early Army aviation training sites, Texas was the site of one third of new fields established in the U.S. during the war. As with many wars, politicians and entrepreneurs also saw the potential growth opportunity. Many cities lobbied for cantonments and expansion of existing military posts. Contracts to build base infrastructure and supply these facilities were lucrative.

Documenting the many WWI Texas bases, cantonments, flying fields, depots, and outposts is no small matter. This is our best effort to compile a comprehensive list from numerous sources (bases used during WWI and the date they were established is noted).

Texas and Texans in the Great War by Wooster

San Antonio in the Great War by Manguso