Texas World War I Centennial Commemoration > General > “ALL IS CALM: THE CHRISTMAS TRUCE OF 1914” — A PLAY ABOUT WWI & CHRISTMAS 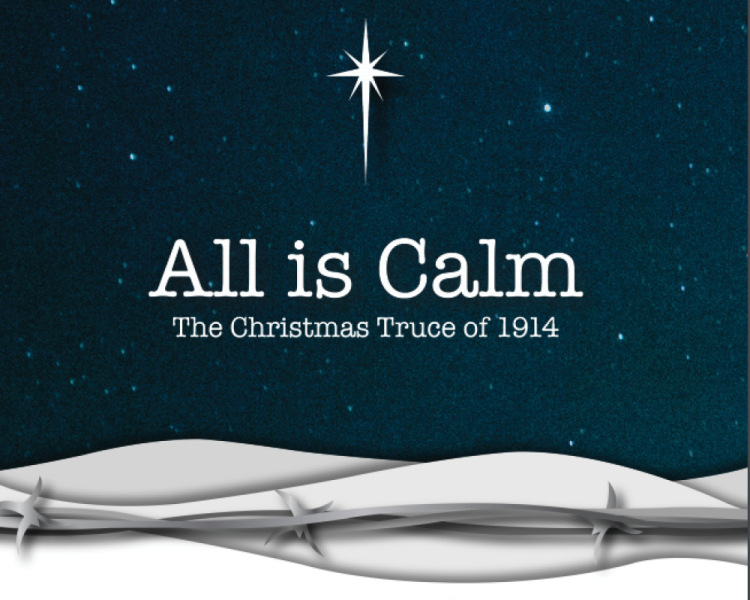 Presented originally in 2016, The Public Theater of San Antonio will again present All is Calm: The Christmas Truce of 1914 at the Russell Hill Rogers Theater November 23 through December 23, 2018. The production tells the story of the impromptu truce between German and allied troops in no man’s land on Christmas 1914. The Public Theater of San Antonio press release describes the concept and staging of the show:

In 1914, at the Western Front, out of the violence comes a silence, then a song. A German soldier steps into No Man’s Land singing Nacht. Thus begins an extraordinary night of camaraderie, music, and peace.

We are pleased and proud to present All is Calm: The Christmas Eve Truce of 1914. This acapella musical highlights the beauty and power of the human spirit during our darkest days. It does so through the songs and sounds of the era along with the written words of the men that survived the horror.

On stage and in the portraits, the cast members do not strive to represent any particular soldier or nationality. Instead, in keeping with the theme of a shared humanity, the actors switch from representing a British soldier, and in the next scene may read the poetry of a Welshman and then recount the words of a German soldier in the next.

The portraits were designed to be dark and foreboding yet can possibly capture the intensity of life in the trenches. Our aim was to have the actors attempt to tell a soldier story simply through their gaze.

Historically, the truce took place near Ypres between British and German troops when an informal cease-fire was followed by songs, exchanges of food, and at least one soccer match broke between trenches of the opposing forces. After the fact, senior officers squelched the news of the Christmas truce and ensured no repeat of the unauthorized fraternization was repeated again during the war.

The play, by Peter Rothstein with musical arrangements by Erick Lichte and Timothy C. Takach, originally premiered at the Theatre Latté Da in Minneapolis in December 2007 (https://www.youtube.com/watch?v=FSgLOSnFWQ0).

Tickets are available through The Public Theater of San Antonio. The theater is located at 800 West Ashby Place. For tickets and more information, visit their website or call 210-733-7258..